In 1999 the small fishing port of Mallaig on the North West coast of the Scottish Highlands completed the first phase of their new pier development.
James submitted and won an open search by Sir Cameron MacKintosh and Mallaig Harbour Authority, to appoint an artist to recognise the community of Mallaig’s unique connection to the sea and its position as an important fishing port and harbour.

Work began in Mallaig in late summer 1999. Hamish smith’s joinery workshop, had been chosen for its prominent position on the pier front.  It also holds historical significance as the oldest remaining original smokehouse. 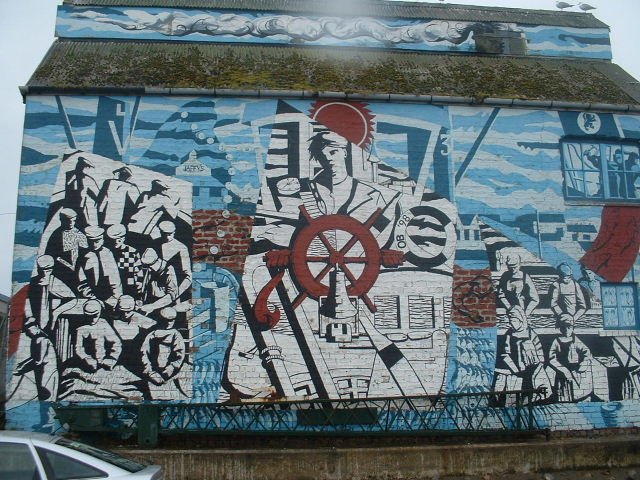 The building at that time was on the boundary of the harbour extension and was open to the sea on both mural elevations.  Over the course of 3 months the worn brickwork was meticulously scrubbed and prepared for the planned mural.  Hamish erected a suitable scaffold for the artist to work from and tarpaulins were bound to try protect both artist and artwork from the often fierce sea and weather front.  The herring fleet which established Mallaig used a